Response to Weekend Assignment #205: Those “Other” Pets

I’m in an unreasonable amount of pain this morning from a wrenched muscle or a pinched nerve in my back, the result of a slip on the ice on Thursday. Just about the only thing I can do without suffering unspeakable agony is type, which makes this an excellent time to get my homework done.

The assignment this week (as always, from Karen at Outpost Mavarin) is to discuss our experience with pets other than cats and dogs. Our only pet these days, and the one constant companion Mrs. Unfocused and I have had since 1990, is BPF: the Big Pink Fishie, familiar to readers of this blog because of the LOLfish I made in response to a dare from Nathan at Polybloggimous (prior posts here and here). The new LOLfish at the top of the post is the first part of my response to my assignment.

When Unfocused Girl was four, we caved in to her increasingly desperate demands for a pet she could hold. After rejecting fur-bearing creatures (Unfocused Junior and I both have allergies), birds (allergies, noise), and turtles (salmonella), we settled on hermit crabs. The first pair, Rosie-poo and Butterfly, lived for several months. None of their successors, Rosie-poo 2, Butterfly 2, Rosie-poo 3, and others whose names none of us can recall, lasted more than a month or two, so eventually we gave up and accepted our lot as a Family With Fish.

Unfocused Girl is now deeply into the Warriors series, and I think she would feel a little odd having a kittypet anyway. If we were to get a cat, I suspect she would leave the back door open all the time, to encourage it to escape to the forest and achieve its true potential as a Warrior for Thunderclan in the fight against Shadowclan. But we can’t have a cat, so the question is moot.

I had cats growing up, though, usually between three and six at a time. We didn’t realize I was allergic to cats — everyone just thought I was a sneezy kid (another reason why the Seventies are often referred to as the “Oops Decade”). Some of the names we gave to the cats we had were a little unusual. The two cats that were generally “mine,” because they slept in my room and preferred to sit with me while I was doing homework or watching TV, were Sesame and Dammit. I was little when we got Sesame, and I named her after Sesame Street. Before we adopted Dammit, she was a nasty-tempered stray who used to invade our backyard and terrorize me when I was small; the Unfocused Mom always ran out into the yard, yelling, “Get out of here, damn it!” and the name stuck. They were good cats.

Oh, crap. This guy says that all bloggers are obligated to post photographs of their cats within 30 days of starting to blog. I’ve been blogging for about 6 weeks, so I’m well past the deadline, and even worse, I don’t have a cat!

OK, here’s an idea: The other day John Scalzi gave his readers a picture of one of his cats to use for LOLcats. So here’s a LOLcat. 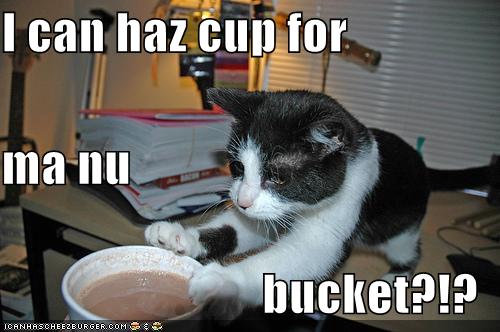 Does that avoid any penalties? I’d hate to get tagged as a scofflaw so early in my blogging career.