Posted on July 6, 2008 | 5 Comments
Thank you for your good wishes in the comments and otherwise. They’re much appreciated.
Junior was a little cranky through lunch, but today Junior started to own his broken arm. We walked to the diner like any other weekend, and he was almost (but not quite) as independent as he usually is; the difference was that he didn’t run ahead to each corner, trying to race his sister. As he said this afternoon coming home from Starbucks, “I can’t race with a broken arm.” But he wore his hat backwards (which, for those of you not in the know, makes it a running hat) and never once asked to be carried, already a huge change from yesterday.
He had a more active day, and has started to learn to use his left hand for things like building with Legos. He waited all weekend for his buddy I. from up the street to come home; I. and his family finally got home around dinner time, and Junior delighted in telling his harrowing tale.
We told Junior yesterday that he would need to have the cast on for about 45 days; he denied it, then got mad, then tried to bargain us down, but we held firm on that figure — no point in raising false hopes. He’s accepted it now. As we went inside for dinner tonight after he showed his cast to I., one of I.’s older brothers told Junior to get better soon. In response, Junior shouted from the top of the porch stairs, “I’ll get better… for forty-five days!”
A picture* of Junior with Unfocused Girl at the end of this post shows him at his defiant best (that’s a lollipop, not a cigarette, by the way; the sling is a custom job by Mrs. Unfocused — she bought more printed fabric today, and I’ll try to post a shot of him wearing the Batman sling when that’s finished).
Last best thing — Junior read to me tonight: The Eye Book, by Dr. Seuss, sounding it out and only needing help on some of the more complicated, counter-intuitive words (“Our,” “They,” “Sometimes”). It was hard work for him, but he pushed through to the end. We’ve been working on his reading for a while, and since school ended, he’s really started making an effort. What do you think that means?
In other news, Unfocused Girl put on her Batgirl costume right after breakfast this morning and wore it all day despite 80+ degree weather, including to the diner and to Starbucks. My secret plan to corrupt their minds with comic books is working. That’s her “watching from the rooftops” pose. 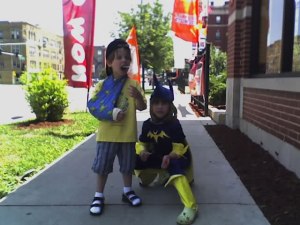 Unfocused Junior and Unfocused Girl, ready for anything.

Finally, I note that I have not yet begun a petition drive to make slides illegal in the City of Chicago. Based on the recent track record of the City Council (thanks for the sparkler ban, by the way!), I’d probably have a better than even chance of getting an ordinance passed if I really worked at it. As it is, though, I don’t expect to change anything about the slide in our own backyard, where the Unfortunate Incident occurred. I told Unfocused Girl today that I’d appreciate it if she’d refrain from climbing up the slide for a day or two, until I get my equilibrium back, and I’ll point out to Junior (once his cast is off and he can climb up onto the playset again) that he should go down the slide on his bottom, not on foot, but other than that I don’t know what else there is to do. I could enclose it in a big plastic tube, I suppose, but that would get really unpleasant on summer days.

* This photograph is copyright 2008, all rights reserved. The remainder of the post is subject to the usual Creative Commons license (see the sidebar for details), but I don’t release the rights to pictures of my kids.